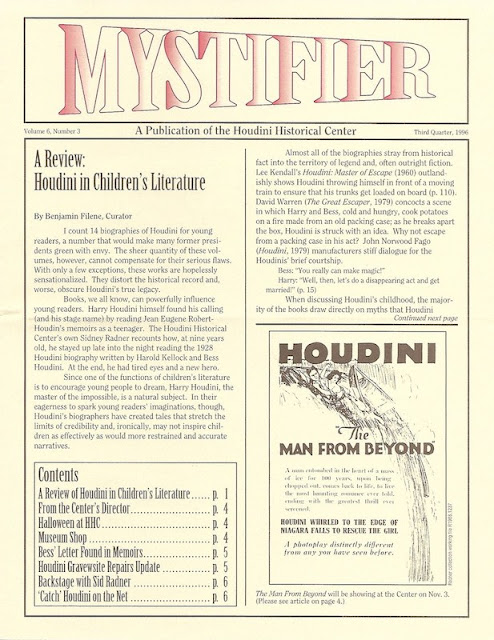 The Third Quarter 1996 Mystifier begins with a highly critical assessment of the available Houdini biographies for children by HHC curator Benjamin Filene.

I count 14 biographies of Houdini for young readers, a number that would make many a former president green with envy. The sheer quantity of these volumes, however, cannot compensate for their serious flaws. With only a few exceptions, these works are hopelessly sensationalized. They distort the historical record and, worse, obscure Houdini's true legacy.


Filene's objections focus on the mythology that many of the biographies embrace, such as the "pies in the cupboard" and "handcuffed convict" episodes from Houdini's childhood. He is hardest on Houdini: Master of Escape (1973) by Lee Kendall, The Great Escaper (1979) by David Warren, and Houdini (1979) by John Norwood Fago. Alternatively, Filene recommends The Importance of Harry Houdini (1995) by Adam Woog as presenting "a far more balanced and nuanced depiction of Houdini's life."

The newsletter continues with a look at passages in the 1960 biography, The Lincoln Collector: The Story of Oliver R. Barrett's Great Private Collection by Carl Sanberg. Barrett was friends with the Houdinis and the book contains an excerpt from a letter written to him by Bess not long after Harry's death:

I must write to you about my beloved, I just cannot rest, he was so proud of his friendship with you, and I know you truly mourn with me. I am a mere shadow, weigh scarcely eighty-five pounds, have been confined to my bed six weeks now, long before my sweetheart went away, yet I live and he in his glorious strength died. His brilliant clear mind never left him for a moment.


An update on the Houdini gravesite repair fund follows with news that the repairs will be completed by Fall. HHC Director Steven M. Wilson writes about "Houdini as Legend", stating: "What the HHC has done, and will continue to do, is to interpret Harry Houdini and his time." The center announces that The Man From Beyond will be screened on Halloween to mark the 70th anniversary of Houdini's death. The Museum Shop reports that a facsimile reprint of Houdini's Margery pamphlet ("a neat little book") is now available for $4.50.

Sid Radner begins his "Backstage" column talking about his recent trip to Italy where he was hosted by magician Silvan. He reveals that Kenneth Silverman's new book will be called Houdini!!! The Career of Ehrich Weiss, and that Ken will be attending the Yankee Gathering in Fall. Sid also announces that Gene Gamache's new documentary, Houdini People Came to See Him Die, is available on VHS, and that it will air on the Discovery Channel in 1997 (in a shortened version). Finally, he announces that the Official Houdini Seance will be held at the Players Club of New York that year.

The newsletter concludes with an article revealing plans for a special online conference to be hosted on AOL on Halloween called "Houdini Escapes the 20th Century" with HHC curator Benjamin Filene. Should we consider this Houdini's very first first foray on the internet?