The Great Houdini will mop up for you! (or not)

Here are two terrific full page trade ads for Houdini's Haldane of the Secret Service (1923). Unlike The Man From Beyond, Houdini turned distribution and promotion of this final Houdini Picture Corporation production over to F.B.O. (Film Booking Office) who ballyhooed the feature to theater owners with ads like these. 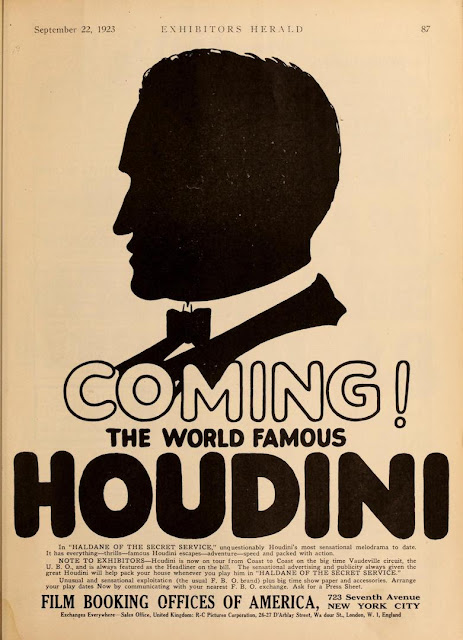 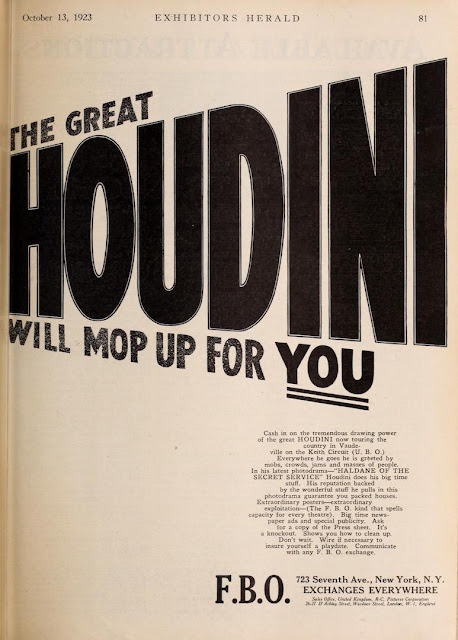 F.B.O. appears to have overpromised what exhibitors were getting in regards to "extraordinary posters--extraordinary exploitation." Several theater owners complained that the 3-sheet poster, which depicts an assortment of Houdini escapes, was misleading as none of the escapes appear in the film. Below is a typical reaction from a theater owner in Middleport, New York.

Now you are probably dying to see that 3-sheet poster, right!? Unfortunately, it's never been reproduced in any book to my knowledge. The only place I've been lucky enough to see it is in the ultra-rare original Haldane of the Secret Service pressbook owned by Kevin Connolly. And even there you can't see the entire poster.

But if one of these Haldane 3-sheets ever showed up at auction, you can bet it would MOP up!