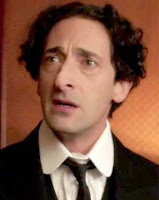 The Houdini miniseries starring Adrien Brody will be leaving Netflix on March 2. The streaming network put up the two-part biopic in March 2015. I'm always amused when people tell me they watched "the Netflix Houdini movie" with no idea it was originally shown on HISTORY in 2014.

Netflix streams the edited U.S. broadcast version. The full unedited international version can be found on DVD and Blu-ray. You can read my review HERE.