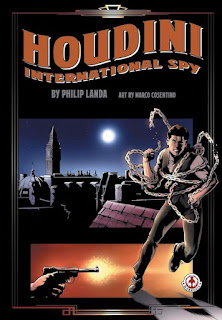 Two new comic books released this week take Houdini into the realm of master detective and international spy, because we've apparently not had enough of that! The first is a graphic novel called Houdini: International Spy by Philip Landa with art by Marco Cosentino. Here's a taste.

Houdini is enlisted by the US Ambassador to Great Britain to locate a missing American doctor and discovers a plot by a fanatical scientist hell-bent on unleashing a modern-day Black Plague on Vienna. 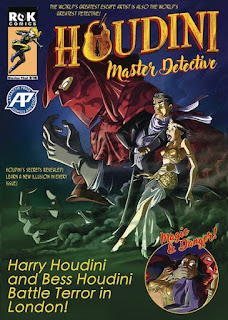 The next book is called Houdini: Master Detective by Jonathan Kendrick, Jamie Allan Nicklin and Simon Mark Wheeler, with artwork by Rafael Broseta and David Belmonte. Sounds like it could be a sequel to the above (or visa versa).

A mystery criminal is committing a rash of diabolical crimes plaguing the city, so Scotland Yard reaches out to Harry Houdini and his wife, Bess Houdini, are called upon by Scotland Yard to help figure out who the evil perpetrator is. But no sooner are they on the case then the villain kidnaps Bess!


I'm not sure how to buy Houdini: Master Detective online, but according to Previews, it will be in stores on February 27.

While I normally enjoy flights of Houdini fiction like this, I'm starting to wonder if books like these are actually doing harm. By consistently presenting Houdini as some sort of crime fighter, are they slowly undermining the facts of his real life and obscuring his true legacy? Or are they just harmless fun that only enhances his legend?