Unseen Haldane of the Secret Service

Here is what appears to be unused footage from Houdini's Haldane of the Secret Service (1923). In it we see Heath Haldane (Houdini) following Adele Ormsby (Gladys Leslie). I'm not sure where in the movie this would have occurred as it does not seem to fit anywhere into the existing plotline. This footage has never appeared anywhere and comes courtesy of our friend Jon Oliver (the man who sleeps in Houdini's bed).


One thing to note here is Houdini/Haldane's clothes. This outfit is never seen in the final film. Interestingly, this same outfit appears in several Terror Island publicity photos, yet Houdini never wears this outfit in that film either. 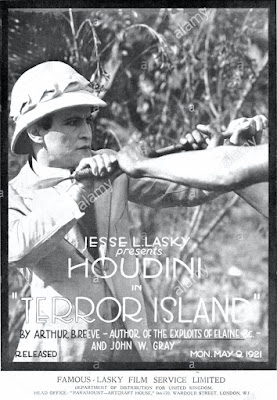 In real life Houdini sported a similar outfit when he traveled to Austria in 1910 and stopped off in exotic ports such as Egypt and Ceylon. So forget the lost Margery Box, Voisin, and Automaton; I want to know what happened to Houdini's pith helmet!

Thanks to Jon Oliver.