'Houdini Speaks Out' in new 2014 edition

A newly revised 2014 edition of Houdini Speaks Out ("I am Houdini! And you are a fraud!") by Arthur Moses is now available on Amazon. This book recreates Houdini's spiritualism lecture with exclsuive material from the Moses collection, including Houdini's full slide show. Here's part of the Amazon description: 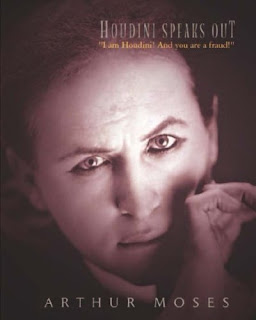 NEWLY REVISED 2014 EDITION - Revealing new insights, this ground-breaking updated edition vividly recreates Houdini's debunking lectures which he presented from 1922 until his untimely death in 1926. The reader becomes involved in understanding his struggles to reach into the afterlife to contact his late mother during an era filled with deceptive spirit mediums. Each of the fifty glass lantern slides that Houdini used to highlight his lectures are painstakingly recreated and matched to his original lecture text.

"Houdini Speaks Out is a very strongly recommended addition to personal, professional, academic, and community library collections -- and should be considered mandatory reading by anyone with an interest in spiritualism, magic, and the occult." -Midwest Book Review


This revised edition has several updates and corrections to the slide presentations. Also, thanks to CreateSpace/Amazon, it can now be offered at half the price of the original 2007 edition.

Purchase the newly revised Houdini Speaks Out at Amazon.com (U.S.) and Amazon.co.uk (UK).