The Grim Game screened in 1974

While doing some research on Houdini's film work at the Motion Picture Academy's Margaret Herrick Library, I came across a review of Houdini's 1919 film, The Grim Game. But what made this review so special is it was written in 1974!

It appears this notoriously unavailable Houdini film was screened at The New School in New York on March 1, 1974, possibly the last time it was ever shown publicly. Patrick Culliton tells me this was the infamous Larry Weeks print, although the program notes by film historian William K. Everson says the film runs 6 reels while original 1919 reviews say it's only 5.

A couple things I really like here. First, this goes a long way toward confirming that Weeks has indeed preserved his print to safety film, as it is highly unlikely (maybe even illegal) that The New School would have screened a combustible nitrate print. It's also interesting that Everson mentions a "special short" Paramount prepared to promote The Grim Game using footage of the airplane accident. This is presumably Desperate Chances, a five minute short currently available on the DVD collection Houdini The Movie Star

, which is the only footage from The Grim Game available to the public (maybe the inclusion of the short explains the 6th reel).

It's also just great to hear a modern reaction to this film, which many magic buffs, including myself, have never seen. Everson says it's "far and away the best" Houdini film, which is also what reviews of the day said about Harry's first Hollywood feature.

Here are William K. Everson's program notes for the 1974 screening of The Grim Game. 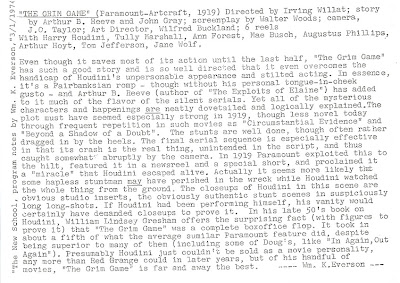