Houdini and Genii go for cover #18 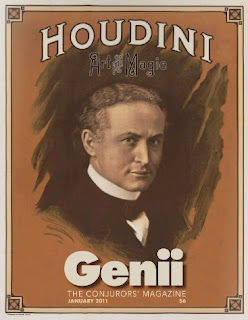 Here's a great way to kick off the new year. Houdini has made the cover of the new January 2011 issue of Genii: The Conjurors' Magazine. And it's a beauty of a cover at that!

Inside the magazine contains a spectacular 18-page spread on the new traveling exhibition, Houdini Art and Magic, with lots of rare photos of Houdini and images from the exhibition, along with articles by Ken Silverman and curator Brooke Kamin Rapaport, as well as blurbs by James Randi, David Blaine, and Richard Kaufman.

The issue is out now to subscribers and should be available in stores soon.


A history of Houdini on Genii
Written by John Cox at 8:19 AM