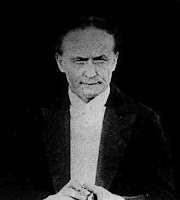 In his new book, Houdini The Key, Patrick Culliton reveals some details of a lost short film Houdini apparently made for Pathe in early 1926.

I threw the net out to some of my fellow Houdini thinkers and collectors for more info, but no one could tell me anything more about this curious short. There's also no mention of it in Matthew Soloman's seminal study Disappearing Tricks: Silent Film, Houdini, and the New Magic of the Twentieth Century

. The small amount of footage that survives appears to have come from the 1950 feature documentary, The Golden Twenties.

Why was it made? How long was it? Why did Houdini do this with Pathe and, most intriguingly, could it have been a sound film? It's not impossible.

Both Fox's Movietone and Warner Bros. Vitaphone sound systems came into use in 1926. The first feature sound film, Don Juan (music only), was released that same year. In fact, 1926 was a year filled with sound film demonstrations across the country in newsreels that bear a striking resemblance to this Houdini footage. So the technology was there. Was Houdini there as well? It would seem out of character for him not to jump on this new technology.

Sound or silent, it would be nice to see this entire film. In The Key we see images of Houdini performing in tux and tails on a full dress magic stage. It is poetic that the last moving images of Houdini shows him as he began -- as the "King of Cards."

UPDATE: It appears more of this rare footage can be seen on the 3-DVD set "Vintage Magic Films" produced by The Miracle Factory.

UPDATE 2: Here's a piece of the footage from the 1986 documentary, Hollywood Ghost Stories.

UPDATE 3: CLICK HERE for details about where and when this short film played, and the title!
Written by John Cox at 3:40 PM