While I was working on my Return to Terror Island post, I re-watched the film to see if there were any distinct landmarks that could help identify exactly where on Catalina Island the film was shot. Unfortunately, it all just looked like rocky coastline, and the native village could have been built anywhere (maybe even on the backlot in Hollywood).

But then came this shot. Talk about a distinctive rock formation! On my next trip to Catalina, I'll search for this, but I thought I'd post it here just in case anyone intimately familiar with the island could identify what I'm officially dubbing, "Terror Point."

UPDATE: FOUND! Eagle-eyed reader Joseph P. offers up the below photo from panoramio which is unquestionably "Terror Point." He also directs us to Google Maps where we see it is located in an area called Toyon Bay. This is much further away from Avalon and the Hotel St. Catherine than I would have imagined. 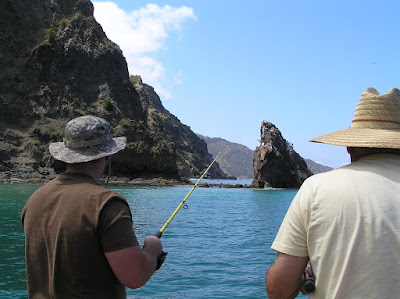