A new Houdini graphic novel for 2011 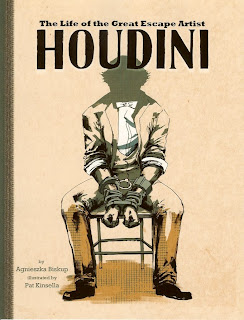 Just in time for Christmas Capstone Press has released Houdini: The Life of the Great Escape Artist

by Agnieszka Biskup with illustrations by Pat Kinsella.

This graphic novel biography for young readers runs 32 pages and does a very nice job condensing Houdini's life into its major and most visual moments. Using the performance of the Water Torture Cell as an anchor, the story flashes back to his influence by Robert-Houdin, his early career performing Metamorphosis, the handcuff escapes, and even the Mirror Challenge. Bess doesn't find her way into the story, but we do get a mention of Houdini's film career. The illustrated story ends before the 1920s, leaving an addendum to describe his Spiritualist crusade and details of his death. There is also a glossary and study aids in the back.

The book appears to be well researched (it cites The History Museum at the Castle in Appleton as a consultant). Of note is some authentic Houdini patter used during the USD, Mirror, and Metamorphosis performances.

All in all, a very nicely done little book, and definitely one for the kids or collection.

. It will be released in Library Binding