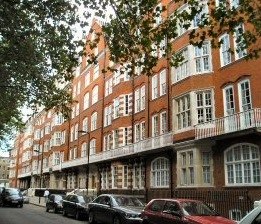 Early in his career, Houdini spent years touring England and Europe with London as his home base. But where exactly did he live during this time?

According to Ken Silverman, “Houdini leased or bought a London flat at 84 Bedford Court Mansions” in fashionable Bloomsbury (Houdini!!! The Career of Ehrich Weiss

, page 168). This address can be found on Houdini’s stationary of the time.

Happily, Bedford Court Mansions are still there, and while the flats have been renovated over the years, the exterior of the building looks much the same as it did in Harry’s day.

The flats now sell for over £1 million. Currently several units are available as weekly rentals. But what of #84? Do the occupants realize they are living in the home of the Great Houdini?
Written by John Cox at 9:17 AM

Email ThisBlogThis!Share to TwitterShare to FacebookShare to Pinterest
Tags: Homes, Then and Now, United Kingdom