A new documentary about magician David Blaine, David Blaine: Beautiful Struggle, had its debut last night on the Travel Channel. In it Blaine says his interest in magic all started when he saw this image of Houdini on the cover of a book in his local library. (He was obviously looking at the Dover edition of The Secrets of Houdini by J.C. Cannell.)

Says David, "As a kid I had very little, and the world seemed hard. I hoped I could be strong enough to survive almost anything. So when I saw a picture of Houdini chained to the side of a building, I was drawn to this beautiful image of struggle, and it stayed with me forever." 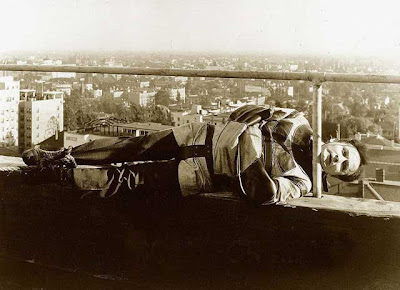 For the record, I think David Blaine is terrific, and the closest performer we have today to Houdini. I also think he produces some of the most stunning magic posters in the business.
Written by John Cox at 2:23 PM