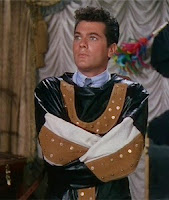 in memory of Tony Curtis and in conjunction with The Jewish Museum's current exhibition, Houdini: Art and Magic. The screening will be followed by a performance by magical entertainer Josh Rand.

The screening is a part of the 20th annual New York Jewish Film Festival, which will be held Jan. 12-27, 2011 at the Film Society's Walter Reade Theater, The Jewish Museum, and The JCC in Manhattan.