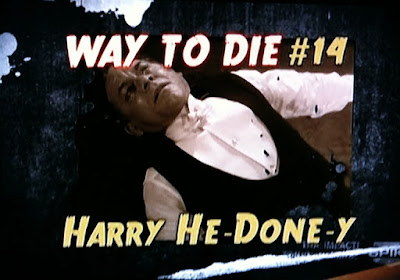 This originally aired in October, but I only just now caught a repeat on Spike TV. 1000 Ways To Die showcases silly, stupid, or gross (ideally all three) ways people have died or accidentally killed themselves.

In this 6th episode of Season 3 (The End is Weird

), along with the vomit fetishist who choked on someone's else hotdog and the basketball played who accidentally hung himself by his bling, was Houdini!

They drastically abbreviated the story and spun it to be that Houdini's belief in his own invincibility was his undoing (kinda true), but it was a nicely produced segment featuring the great Jim Bentley as Houdini. In it he performs a straitjacket and roped chair escape and, yes, reenacts the infamous dressing room punch.

Okay, maybe not the most dignified of tributes, but at least Houdini's death had the best ranking of the entire show (#14). Harry wouldn't have it any other way.