The alleged loves of Harry Houdini


Did Houdini have extramarital affairs? As biographers have dug deeper and deeper into the Houdini story, his once chaste (even prude) reputation has come into question. One thing is for sure, he doesn't appear to have struggled with impotency as Ruth Brandon theorized in her 1993 biography, The Life and Many Deaths of Harry Houdini

. But if Houdini had affairs, who were the other women in his life?

Here are the major suspects:

Daisy White - This first rumored Houdini mistress worked as both a "box jumper" (a magician's assistant) and behind the counter at Martinka Magic Shop in New York City (which Houdini once owned). Word of a Houdini-Daisy affair was common gossip in magic circles in Houdini's time and after. Maurice Zolotow, who took an active interest in Houdini's personal life and penned a veiled tell-all fictional biography (The Great Balsamo

By all accounts, Daisy was a stunner. She was memorably played by Adrienne Barbeau in the steamy TV movie, The Great Houdinis. After Houdini's death, she fell in with the Rev. Arthur Ford crowd and become a proponent of Spiritualism.

Lila Lee - According to actor Georgie Jessel, Houdini and his Terror Island co-star Lila Lee were romantically involved. (Jessel worked with Lee in Gus Edward's School Days.) Could Harry and Lila have hooked up while on location on romantic Catalina Island in 1919? Afraid we only have Jessel's word for this. But you know what they say in Hollywood -- all rumors are true.

Lee continued acting into the 1950s and died at age 72 in 1973. Shame she appears to have never been interviewed by any of the major Houdini historians or biographers of the day. Sounds like she had some stories to tell.

Charmian London - Well, Houdini is completely busted on this one. The widow of famous author Jack London recorded details of her trysts with Houdini in her private diary, which was uncovered by Ken Silverman in his book, Houdini!!! The Career of Ehrich Weiss. The passionate three month affair took place while Houdini was playing the New York Hippodrome in 1918 and Charmian was staying in Greenwich Village. London called Houdini her "Magic Lover" and "Mate-Man." Houdini called her "the woman in white" and "Mate-Woman." No record of what Bess called them.

The affair broke off when London returned to her home in California, but she would continue to exchange passionate love letters with Houdini for years.


Fay La Foe - Murderer Gary Gilmore always claimed he was related to Houdini. According to family lore, his grandmother, who performed in Vaudeville under the name Fay La Foe, had an affair with the young Houdini in California. The affair produced Gilmore's father, Frank. La Foe, who later worked as a Spiritualist, described Houdini as a "pip-squeak and a cheap tramp." She also claimed to have taught Houdini "everything he knew about magic."

Considering the vague timeline (Houdini was 16 and not yet a magician when Frank was born in 1890), the fact that Frank Gilmore was a con-man and Gary a raving psychotic, I think we'll give Harry the benefit of the doubt on this one.

The unnamed redhead - Bessie herself told this story to Linking Ring columnist, Jerry Anderson, of how, two weeks after they were were married, Houdini was spotted escorting an attractive red-haired showgirl from a dime museum after his show. Bess got wind of this and staked out the backstage door. When Houdini appeared with his companion, Bessie took matters into her own hands (and fists). "Harry had to pull me off," said Bess.

But was Houdini having an affair with this mysterious redhead, or just escorting her home in a rough neighborhood as he claimed? Bess ultimately accepted his explanation. When I hear this story, I always imagine this redhead as a Gibson Girl.

Milla Barry - Bill Kalush and Larry Solman smoked out this one in The Secret Life of Houdini. In 1903 Houdini shared the bill with singer/actress Milla Barry, and appears to have become personally entangled with her in some way. He confided in a close friend that Barry was attempting to break up his marriage. "I am having a hell of a time, and it will become worse," he wrote.

But was this an affair, or just a fatal attraction situation? I tend to think it was something other than romantic. Most of Houdini's mistresses come into his life in the late teens and early 1920s, when Houdini was in prime male mid-life crisis age. I also don't think Houdini would cheat while his mother was still alive. 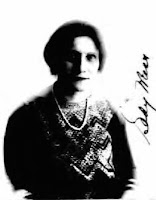 Sadie Glantz Weiss - Say what? Houdini certainly had major issues with his sister-in-law. In 1917, Sadie left Houdini's brother Nathan for his other brother Leo. Believing their actions somehow contributed to his mother's death four years earlier, Houdini held a vicious life-long grudge against Leo and Sadie. Thing is, the rest of the family didn't necessarily have a problem with the switch. Even Nathan appeared okay with it. So what's the problem, Harry?

It's worth speculating, as Ruth Brandon did in The Life and Many Deaths of Harry Houdini

, that Sadie's real crime was choosing Leo over Harry. She certainly played the Weiss brothers, and this did take place right during the period of Harry's other amorous experimentations. Then his fury makes a bit more sense. It was Houdini scorned.

Julia Sawyer - Julia Sawyer was Bess's niece who became Houdini's private secretly when John Sargent died in 1920. Julia also featured as an assistant in Houdini's full evening roadshow of 1925-26. There are rumors that Houdini had a late in life liaison with one of his female assistants and Julia is the chief suspect. But no proof exists, and the incestuous nature of this one makes it hard to believe. Nevertheless, she makes the list.


But what of Bess Houdini in all this?

Not long after Harry's death, Bess discovered a cache of love letters written to her husband (some reportedly from Daisy White) in Houdini's safe. She invited all the women to tea at 278. When they left, she presented each with a parting gift -- their letters.


UPDATE:
Lady Butler - The 2014 miniseries Houdini, starring Adrien Brody, shows Houdini having several affairs, including a kinky relationship with with British painter Elizabeth Thompson a.k.a. Lady Butler. But this is another Hollywood fiction. There's no record of Houdini and Lady Butler ever having met, let alone shackle-up together.