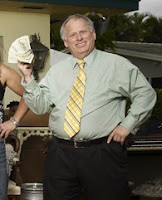 Last Tuesday I watched the premiere episode of Big Brian the Fortune Seller as I saw there would be a Houdini reference. The truTV series follows estate seller "Big Brian" Elenson and his motley crew as they sell off years of accumulated goods from various homes in the New Jersey area.

While searching a home in this particular episode, Brian stumbled on a silver tipped Victorian walking stick engraved HH. Well, that can only mean one thing -- it must have belonged to Harry Houdini! Brian went on to say Houdini was "known to have used sterling walking sticks" (news to me) and that the item could be priceless. To his credit, he said he would need to research it.

The show continued with catfights, screaming matches, and the destruction of a piano that was so obviously staged it was embarrassing (and this from a guy who watches America's Next Top Model). At the end of the show the cane came back and, much to my surprise, Big Brian's "research" found that it was genuine! He based his conclusion on the handle inscription, pointing out that the double HHs matched Houdini's unique double HH signature (it doesn't). The show ended with Brian saying he would contact one of the major auction houses and "let the world decide the real value of the cane."

So who will start the bidding? 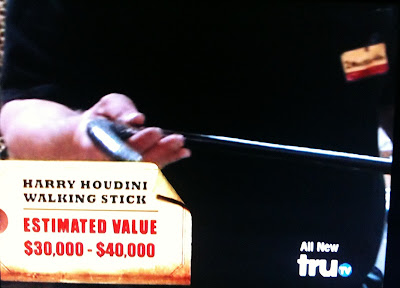