Did Houdini do the bullet catch in the 1890s? 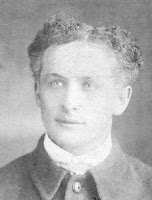 The bullet catch is generally considered the most dangerous trick in magic. The danger is pretty well spelled out in the title of a book about the effect by Ben Robinson called, Twelve Have Died

Houdini's association with the bullet catch is well known. In 1918, Houdini announced that he would do the infamous trick after his friend and fellow magician Chung Ling Soo (William E. Robinson) was tragically killed onstage while performing it in England. But in a letter, Harry Kellar made an impassioned plea for Houdini not to do it:

Now, my dear boy, this is advice from the heart, DON’T TRY THE D—N Bullet Catching…no matter how sure you may feel of its success. There is always the biggest kind of risk that some dog will “job” you. And we can’t afford to lose Houdini. You have enough good stuff to maintain your position at the head of the profession. And you owe it to your friends and your family to cut out all stuff that entails risk of your life. Please, Harry, listen to your old friend Kellar who loves you as his own son and don’t do it.


Moved by Kellar's words, Houdini never did the trick. This just added to the legend of the bullet catch -- a trick so dangerous even Houdini wouldn't try it.

But now handcuff and restraint expert, Joe Fox, has discovered this intriguing nugget in the April 1937 issue of Genii. This appeared in Edward Saint's regular column, "Thru the Monocle."

Jack Hyman was Houdini's close friend and original partner in The Brothers Houdini, so he's a credible source for this info. Also, Ed Saint reporting this somewhat gives it the tacit approval of Bess. Houdini expert Patrick Culliton says he is familiar with this claim, and he wonders whether it was from this, not gamblers, that Houdini received the bullet in his hand that he is said to have carried all his life.

However, it's always possible this is just Ed Saint doing what he did best -- building up Houdini's legend. I should point out that in this same column he claims, "Houdini's Uncle Newman invented Fleishman's Yeast." (?) But while Saint was not shy about endorsing Houdini-created myths, I don't recall any instance where he generated his own fictions. He didn't need to. And why would he pull Jack Hyman into it?

So what do we think? Could this be true? Did Houdini do the most dangerous trick in magic at the dawn of his career?


UPDATE: Patrick Culliton checks in with further evidence that Houdini did the bullet catch early in his career. On page 77 of his book, The Tao of Houdini (1997), Patrick reproduces what Houdini himself told the Club of Odd Volumes in Boston in 1922:

"I had a rather unique experience performing the bullet-catching feat. It was customary for me to present this with a large horsepistol, allowing the committee to load it with a marked bullet, so that I never really touched the gun. There was a thick plank on the table leaning against the back wall. The committee were given the option of firing at the board, which would be smashed to splinters, or at me. However I exacted the promise that, once having announced their decision, they would not, on their word of honor, change their minds. For the infinitesimal fraction of a second there would be an awe-inspiring and breathless silence after the resounding crash of the bullet had made havoc of the plank, which brought home to the committee the seriousness of their decision, had I been chosen as target. The effect of the illusion showed the miraculous appearance of the bullet between my teeth, after having smashed the plate which I held in my hand. Never once, in all my experience, has the committee failed to fire at the board first."


Patrick also informs us that Houdini's uncle did indeed invent Fleischman's Yeast.
Written by John Cox at 7:40 AM