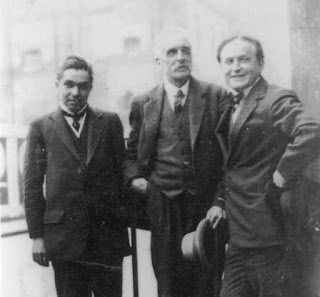 In this 2009 interview about his film, Is Anybody There?

(which recently made a list of Top 5 Magician Movies), actor Michael Caine had this interesting nugget of information about Houdini’s influence on other magicians...hair.

Q: Did you learn any magic tricks while doing The Prestige?

CAINE: No, I didn’t play a magician in The Prestige, you see, I played the guy who made the tricks. It was Hugh and Christian who were the magicians. No, but in this, the first thing I saw that I’d got right, was before we ever started shooting the movie, I decided to part my hair in the middle. And then I had to meet the real magician to learn the tricks, the technical advisor, and he came in, and his hair was parted in the middle and I thought I haven’t even started the movie and I’ve got something right. (Laughs) And I said to another magician, who I met later, I said, I told him that story I said, and he had his hair parted in the middle, and he said a lot of magicians have their hair parted in the middle. And I said, “Why is that?” He said, “Houdini. Houdini parted his hair and all the young magicians copied him.”

You can read the entire interview HERE.
Written by John Cox at 9:16 AM