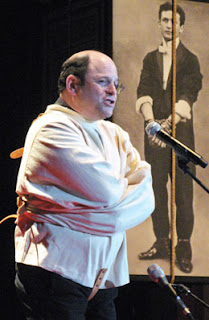 Five hundred guests who helped raise $1.3 million for the Jewish Museum in New York witnessed a most unorthodox Purim shpiel, performed by actor, writer and director Jason Alexander (aka George Costanza of Seinfeld

Alexander declared: “There is no association between Purim and Houdini. Purim celebrates a miracle, and I will perform a miracle.”

As three volunteers from the audience buckled him into a straitjacket, Alexander proclaimed, “I will recite the Purim shpiel while attempting to escape from this 100% canvas-and-leather straightjacket!” Did he make it?