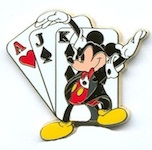 Our friends at the Magic Newswire report that Walt Disney World in Florida will convert their Town Square Theater on Main Street, U.S.A., into the new home of Magician Mickey Mouse. Guests can go backstage to visit Magician Mickey in his rehearsal room along with the Disney princesses. The new attraction is set to open in early April.

But here's the part I really like. According to a Disney Imagineer, various posters featuring Mickey’s magic acts will be placed throughout the queue line and are designed to enhance the experience even more:


“You will recognize the poster style as that of turn-of-the-century magicians such as Houdini, but these posters carry Mickey’s magical touch that can bring them to life and interact with you while you wait.”

Looks like it's time for a trip to Disneyland!
Written by John Cox at 12:45 PM