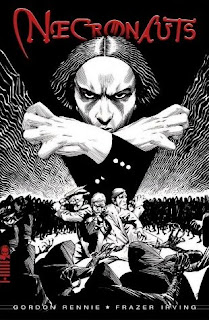 Good news. The superb but hard to find Houdini mash-up graphic novel, Necronauts, will be reprinted as part of a collection, Tharg's Terror Tales Presents Necronauts and Love Like Blood


From the deepest, darkest recesses of the Nerve Centre vaults, the eerie alien editor of 2000 AD known as the Mighty Tharg presents some horror-tinged tales in time for Halloween.

In Necronauts, world famous escapologist Harry Houdini must join forces with novelists H.P. Lovecraft, Sir Arthur Conan Doyle and phenomenologist Charles Fort to defeat an unholy force which has followed him back from a place beyond human imagination...

A Love Like Blood sees a vampire prince and a reckless female werewolf fall in love, despite the fact that their tribes are engaged in an age-old war. Does love still conquer all when fangs are involved?

Necronauts is written by Gordon Rennie with illustrations by Frazer Irving. This new "Tharg" collection can be pre-ordered on Amazon. Cover art is not yet available.
Written by John Cox at 2:27 PM