Mary Swan, Artistic Director and Chief Executive of the theater company Proteus and the writer-director of the acclaimed play Houdini, is here today with exciting news and a very important plea. I will let Mary take it from here: 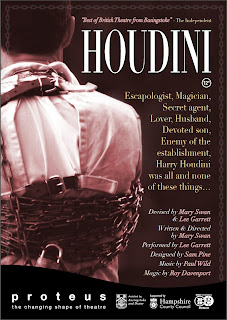 Proteus is a UK based theatre company with a thirty year history of creating high quality shows, in 2009 we were invited to the ‘Brits Off Broadway’ festival in New York and regularly tour throughout the United Kingdom. In the Fall of 2010 we created a one-man show about the life of Harry Houdini which toured to audience and critical acclaim, The Stage newspaper calling it “A worthy tribute to a show business legend, simply captivating”.

Now we have been asked to take Houdini into London's West End to the Arts Theatre for a four week run in April over the Easter and Royal Wedding period! This is a perfect venue for the show, a mere stones throw from Leicester Square right in the heart of Theatre land.

We have a problem however, as a registered charity under UK rules we cannot use our reserves to underwrite the run. We expect to at least break even and hopefully make a small profit, but need theatrical 'Angels' to help us make the dream a reality.

We think we need to be underwritten to a total of about £40k, and the 'Angel' relationship means that we would only call upon the money should we have a disaster and not sell a single ticket. Even if we didn't break even we would only be calling upon a small percentage of the guarantee, and if we did, we wouldn't call upon any of it!

The benefits would be names/logos (if a business) in the programme, tickets to the gala press night and potentially a small return if we made a profit. We think, due the resurgence of magic as a popular form on TV in the UK, that we could get good audiences over the period and certainly all the marketing, PR and theatre business people we have spoken to feel it's about as safe a bet as you could get! Add to that the fact that London will be crawling with tourists over this period, and this looks like a good proposition.

Already we have raised a small percentage of the pledges needed through individuals; audiences, magic lovers and businesses local to the company, but there is still a long way to go. Any help you can give, or if you can pass this message on to someone who could support the project, we would be enormously grateful.

Here’s the trailer for the show and further info can be found on our website www.proteustheatre.com.

If you wish to contact me I can be reached via e-mail.

Let’s get Harry back in the West End of London!