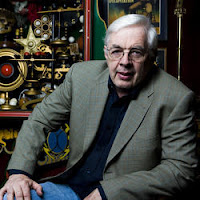 Last night I had the pleasure of attending The Magic Castle's special Magic History Week showcase, and I'm happy to report that Houdini is well represented. Not only does his photo grace the Magic History Week program (below), but legendary illusion builder John Gaughan performed one of Houdini's lesser-known stage illusions, Goodbye Winter, in the Palace of Mystery.

In the trick, an assistant (in this case the attractive Vanessa Lauren) vanishes atop a tall table after she's covered with a simple curtained frame. Houdini's own description of the effect reads: "Vanishing a living, breathing human being in mid-air, in the center of the Stage, away from all curtains and in full glare of lights in less than One Millionth of a Second."

Houdini first introduced Goodbye Winter as part of his 1914 "Magical Revue." He revived it in 1922, along with the Vanishing Elephant, during live appearances at the Times Square Theater in New York to promote his film, The Man From Beyond. He later incorporated it into the magic portion of his 1925/26 full evening show under the new name, Wintertime.

It's really a remarkably effective trick, very simple and direct in design and presentation. It tells me Houdini brought his escape act philosophy to his stage magic -- keep the props simple and relatable and present it in full view of the audience (meaning natural stage lighting). One minute she is there and next she is gone. Simple and baffling! A large reproduction of the "Houdini For President" lithograph graced the stage during the effect. John later told me the Goodbye Winter apparatus is authentic in design, but the patter Houdini used in unknown.

Even though the trick was created for Houdini by Charles Morritt, seeing an authentic Houdini stage illusion makes me what to argue with a little more passion that his reputation as a magician deserves more respect.

However, as effective as Houdini's Goodbye Winter was, it was John's presentation of Robert-Houdin's trapeze automaton, Antonio, that truly stole the show. It's just amazing how a trick created in 1848 could completely captivate an audience in 2011. 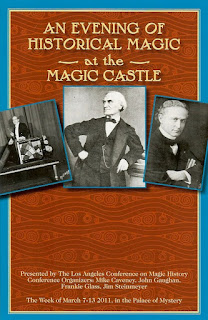 The Palace show was MC'd by Mike Caveney, who performed Paul Valadon's "The Drum that Can't Be Beat" and "Well, I'm...!". Closing the show was a remarkable performance by actor and magician Jonathan Levit playing Howard Thurston under the technical direction of Jim Steinmeyer. Using authentic props and patter, "Thurston" presented The Cards of the Air and Sawing a Woman in Halves. Maybe I'm just a big magic history nerd, but I found the original Sawing a Woman more entertaining, amusing, and baffling that any modern interpretation.

Also as part of Magic History Week is the lovely Lisa Cousins, who performs elegant and authentic antique magic in the Parlour of Prestidigitation. Houdini gets some attention here as well as Lisa's act includes an early version of The Flight of Time, which was later modernized and performed by both Houdini and Hardeen.

The Magic Castle's Magic History Week is presented by The Los Angeles Conference of Magic History and continues through March 13. It is a must see! In fact, I just might go back and see it again.
Written by John Cox at 8:32 AM