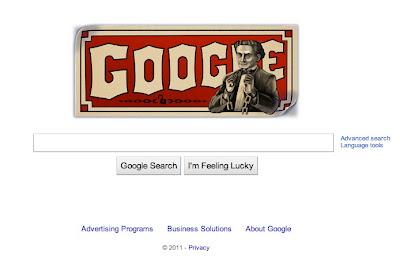 According to The Bennington Vale Evening Transcript, there was more to yesterday's Houdini Doodle than met the eye. The news blog reports that a gaming expert in San Narciso County discovered a way to cause the image to animate and "free Houdini."

Meyrian Dofskelge, a business analyst who specializes in the electronic gaming industry, claimed that when he first saw the doodle on Thursday, he immediately began experimenting with it. But he refused to explain how he solved the puzzle. "Like any good magician, I keep my secrets," he said.

The only clues he would reveal were that clicking on the doodle directly would lead to a dead end -- merely generating a search for Houdini -- and that to figure out how a magician’s illusions operate, one must "inspect all the elements inherent in the environment."

According to Dofskelge, once the doodle is unlocked, an HTML 5 animation depicts Houdini upside down, with his wrists chained together. After a few seconds of writhing around the doodle and squirming, Houdini breaks the chains and settles in the lower right hand corner of the image, as it appears in its static form. As an added bonus, if users with Google accounts are logged in, Houdini causes a message to appear beneath the doodle, which features the user’s name and information specific to his or her online activity. However, Dofskelge admitted this aspect of the animation was "notably creepy and a bit unsettling."