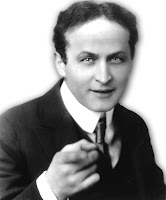 What a birthday Houdini is having! Not only is Google honoring him with a special Doodle, but "Harry Houdini" is now trending worldwide on Twitter. What does this mean exactly? I'm not sure, but I know it's good!

Hash mark those tweets #Houdini and be sure and follow me @HoudiniWild.

Looks like Houdini is now officially a 21st Century superstar.
Written by John Cox at 11:50 AM