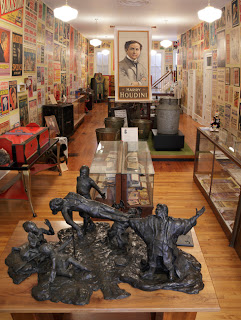 American Idol: Becoming Harry Houdini uses artifacts and photographs from the Museum's extensive collection. Because several of their best known Houdini artifacts (like The Milk Can) are traveling this year as part of Houdini Art and Magic, AMM will be showcasing Houdini items that the public rarely sees. In addition, visitors from within the state will be especially interested in the story of Houdini’s final days, which, of course, have a Michigan connection.

To help celebrate this season's opening, award winning magician Jeff Grow will be at the Museum on Thursday, April 7th, from 11 a.m. to 2 p.m. Grow, recipient of several New York Innovative Theatre awards, will both perform and assist with tours of the museum. His visit to AMM will coincide with his performance locally at the Franke Center for the Arts.

The coming season also promises a continuation of their highly popular Behind the Curtain lecture series produced by author, magician and historian Dennis Laub, and the realization of a summer day camp for young magicians. Details of these activities will be made available on the AMM website and Facebook page.