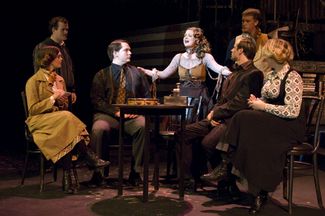 The Daily Examiner reports that Houdini: The Man from Beyond has been selected as one of seven new Australian musicals to be showcased as part of the Sydney Writer’s Weekend. The 25-minute showcase will be presented by talented former and current acting students from the University of Southern Queensland's School of Creative Arts.

Houdini: The Man from Beyond was written by composer Russell Bauer and poet Bruce Dawe and is directed by multi-award winning theater professional Sue Rider. The musical enjoyed a successful world premiere season at the University of Southern Queensland (USQ) last year.

Says composer Russell Bauer, "Broadway has been trying to mount a musical production based on Houdini’s life, starring Hugh Jackman. After being shelved for the past nine months, it has been postponed again for at least another 12 months. Perhaps Hugh Jackman could be lured back to Australia to star in a Houdini musical that is already completed – this one!"
Written by John Cox at 11:17 AM