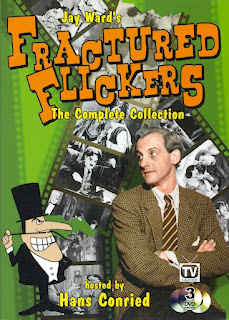 Here's something that has been hiding in plain sight for almost 50 years. Until now, I believed that the first time any footage from Houdini's silent films appeared on American television was in the documentary The Truth About Houdini in 1976. However, it turns out nearly 3 minutes from The Master Mystery first aired on American television in 1963 as a "fractured flicker."

Fractured Flickers was a syndicated half-hour comedy show produced by Rocky and Bullwinkle creators Jay Ward and Bill Scott and hosted by Hans Conried. The show was made up of clips from silent movies dubbed over with comedic dialogue. Even though it's a little depressing to see classics like Blood and Sand and The Hunchback of Notre Dame reduced to this use, the show had some funny and subversive moments, and back in the day this was pretty much the ONLY way you could see actual footage from classic silent movies on TV.

And it turns out that footage included Houdini! In the third episode of the first season, Houdini's 1918 serial, The Master Mystery, was given the full fractured flicker treatment. This footage is nice and clear, but as the show does not credit their sources, it's unclear if this footage came from the Rohauer archival print or another source.

The segment, which you can watch below, juxtaposes three different sequences from The Master Mystery and jokes it up as the adventures of "The Clover Boys at Camp." (The aerial footage is from a different film.) It's not especially funny, but many of these moments, including shots of the Automaton in action, would not be seen until The Master Mystery was finally released on VHS in 1998.


Fractured Flickers - The Complete Collection was released on DVD in 2004. It's possible there are more bits of Houdini's silents buried among these 26 episodes. Over the next few weeks I'm going to look them over and see if I can discover what else might be hidden among the Fractured Flickers.


UPDATE: Having now scanned through all 26 episodes, I can report that the show continued to use random clips from The Master Mystery, including more footage of the Automaton, Jack Burns, Ruth Stonehouse, and Houdini in the electric chair. However, nothing that is considered lost.

UPDATE 2: Bill Mullins has provided a list of even earlier Houdini appearances on TV: Houdini on early television
Written by John Cox at 10:06 AM