William Larsen Sr., who founded Genii magazine in 1936, passed away on July 5, 1953. His son, Bill Larsen, Jr., who would later co-found the Magic Castle with his brother Milt, became the new editor-in-chief of Genii and in 1955 revived the tradition of dedicating the October issue to Houdini. Says Larsen, "We dedicate this issue to the man who, in death, has done more to popularize magic than any living magician." 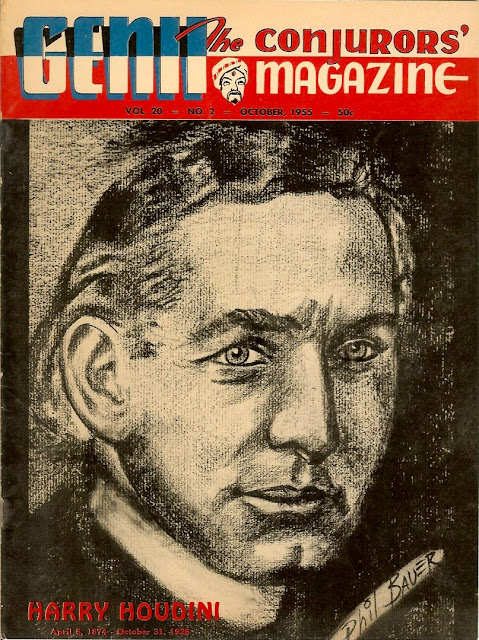 The issue features a charcoal illustration of Houdini by Phil Bauer on the cover. But the real highlight inside is the full transcript of the Final Houdini Seance, taken from a recording that was released as a record. The article also includes is a nice photo of Ed Saint and Bess holding the Mirror Handcuff. Says Larsen, "I'm sure you will find it interesting, and I feel that this is one issue you will want to file away for future reference." (Done!)

The issue also has an article about "Houdini and Alexander Heimburger" by Fred Rickard and Phil Bauer. The article, (largely an excerpt from The Unmasking of Robert-Houdin) includes a second charcoal drawing of Houdini and Heimburger by Bauer. According to the Bauer, the drawing was made from a collection of "50 stereoptican slides" given to him by Claude Leaf, who had acquired them from Bess. Sounds like this was Houdini's spiritualist lecture, which is now in the collection of Arthur Moses and was reproduced in his excellent book, Houdini Speaks Out.

The magazine also features an article by Charles Ruben called "Escape Ideas", in which he notes:

It is claimed on good authority that Houdini was once unable to get into his own apartment in London, late at night, as he lost the key to same.


Poor Houdini is always getting busted for these embarrassing moments, even after death. This is one I've never heard before, but what I like here is it's a rare mention of his little-known London apartment. 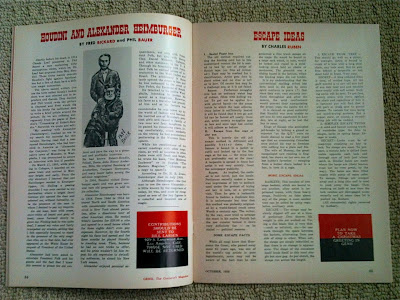 Other items of note include an obituary for John J. McManus who died September 7, 1955. The McManus/Young collection, which include Houdini's famous runaway postcard, is now housed in the Library of Congress. There is also an interview with Billy McComb, one of the great men of the Magic Castle, who also had a cameo in Young Harry Houdini.

By the way, editor Bill Larsen Jr. appeared (uncredited) in the 1953 movie HOUDINI as the magician who performs the Guillotine at the S.A.M. convention.


Click here for a complete list of all the Genii-Houdini cover issues.
Written by John Cox at 11:15 AM