A mystery madam and her Milk Can 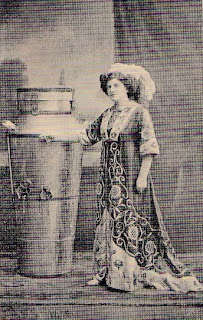 Donald Schmidt of the Houdini Club of Wisconsin (of which I'm now a proud member) alerts me to this photo of an unidentified woman and what appears to be a version of Houdini's Milk Can escape.

At first I thought this was Minerva, who performed a version of the escape that drew Houdini's ire and fire in 1908. But Minerva expert Gary Hunt assures me it is not. In fact, this photo was featured on the cover of the January 1992 issue of The Collectors Forum which offered a prize for the reader who could identify this performer. As far as I know, the mystery remains unsolved.

So does anyone have any idea who is this person is? Donald also wonders if this photo pre-dates 1908? If so, that could open a whole milk can of worms.
Written by John Cox at 5:09 PM