Teller on Houdini: "He's one of the few magicians who mattered."

The Montreal Gazette has a nice interview with Teller (of Penn & Teller), which includes these thoughts about Houdini: 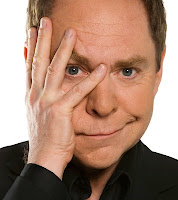 Teller called promptly at 3 p.m. on Wednesday, from the comfortable confines of a “little corner I call the Houdini alcove,” in his home in Las Vegas.

“It’s full of Houdini rarities,” he boasted. Asked whence his love for the famed escape artist, he continued: “He’s one of the few magicians who mattered. He dealt with topics that were not just mere amusements, in the Vaudevillian sense, but that came close to people’s lives.

“He was one of the major spirit debunkers of all time. In his day, spiritualism was very popular as a way of communicating with the dead. He did serious investigation into how it all worked, and that became part of his show.”


Read the entire article, Fantasia: Teller finds the terror in truth, at The Montreal Gazette.
Written by John Cox at 6:48 PM