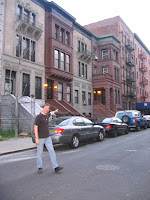 Here's something fun. Daniel Modell of New York has started a petition on change.org to rename the 200 block of West 113th Street in Harlem to "Harry Houdini Way".

This, of course, is to honor the site of Houdini's house at 278 West 113th Street. The petition is addressed to W. Franc Perry of the District 10 Community Board and the New York City Council.

So far the petition has 18 signatures. It appears this is a repeated attempt. I'm not sure I really need to see the street renamed. I'm happy enough that the house now has a historic plaque at the door. But what the heck. I signed it anyway. Harry would love it!

You can sign the petition and/or watch its progress at change.org. 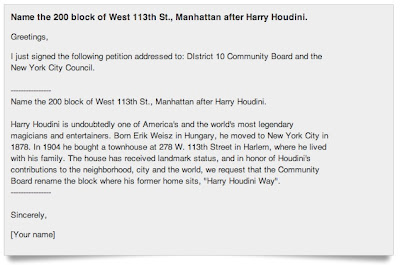 Thanks to Michael Cartellone for the heads-up.
Written by John Cox at 10:21 AM