When failure meant a drowning death

Last night I took a friend to the Magic Castle in Hollywood and, of course, showed her the Houdini Seance Room (I always save it for last). This room -- which has a truly spooky ambience -- is filled with remarkable Houdini artifacts, such as a white straitjacket, handcuffs, and rare photos, much of which had been passed to William Larsen Sr. by Bess Houdini herself. While there is much to be impressed by in the room, what my friend really responded to was an image of the poster below. 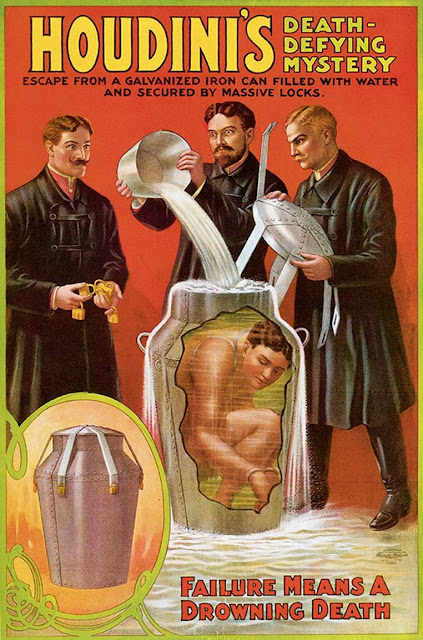 Of course, this poster is well-known to Houdini and magic buffs. But sometimes it takes the reaction of a "civilian" to remind us just what a masterpiece poster this is. It could even be Houdini's greatest poster. Just look at it! There's the cutaway image of Houdini inside the can, which has been likened to a womb. There's the frightening image of the can locked tight, seemingly impossible to escape. And last but not least is the incredibly effective tagline: Failure Means a Drowning Death.

The Milk Can marked an evolution of Houdini as a performer. Recall this was 1908 when Houdini was  still known as "The Handcuff King and Prison Breaker." Apart from his bridge jumps, failure meant humiliation and loss of reputation. But now Houdini brought death into the theater. To use a modern expression, he was "taking it to the next level" by creating stakes that were now, literally, life and death. And all of that was first announced here with this remarkable poster.

And lest you think this tagline is just for effect, know that at least one performer has died performing the Milk Can. Even Houdini and Hardeen had close calls. It is a dangerous escape.

Houdini would perform the Milk Can for only four years (frequently accepting the "challenge" of having it filled with real milk or beer). But the escape would be so imitated that Houdini would pass it onto his brother, Hardeen (who used his own version of this same poster), and replace it with his masterpiece, The Chinese Water Torture Cell. But the Milk Can has remained one of Houdini's most famous and iconic escapes to this day. And last night in the Houdini Seance Room, even after a century, I saw it still has the power to make someone say..."Whoa!" 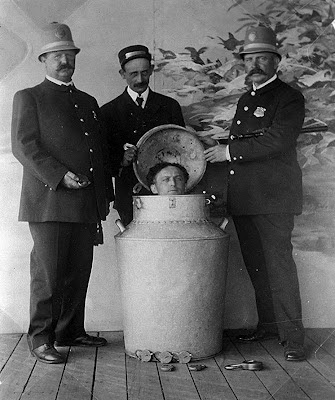