Why I should win JREF's one million dollar prize

Okay, bear with me because this is going to be a strange one. Or better yet, bail out now, because I'm about to prove just what a Houdini obsessed freakshow I really am...on possibly a cosmic level!

Still with me? Okay, here's the story.

When I was a kid and the Houdini fervor hit hard in 1975, I did what many kids do; I drew pictures of my new hero (I was a big drawer in this days, but not a very good one). The first picture I drew was of Houdini inside his Water Torture Cell. This was because I had just seen the Tony Curtis film and my drawing was very much inspired by the Curtis version of the escape. I didn't know any better. Still, I considered it my "best" drawing. (You can see my masterpiece here.)

Two years, several books, and many drawings later, I decided to redraw my "classic" USD picture, but this time I would draw what the cell really looked like. By now I had seen photos of the real cell in books and had even seen photos of the surviving cell on display at the Houdini Hall of Fame. I can remember going into this "project" with the controlling thought -- draw the real thing. What I drew was this: 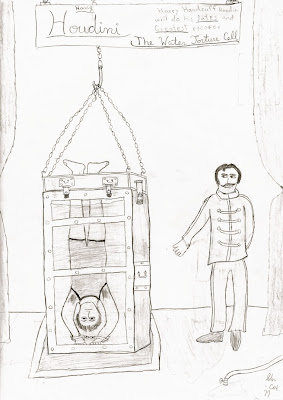 Okay, here's the thing. I got much of it right, based on what photos were available to me at the time. But as I neared the end of the drawing, I suddenly decided to drawn two horizontal bars across the face of the cell. Now, I knew this wasn't correct. All the photos showed the front of the cell was a clear plate of glass. Still, I wanted to draw those bands, even though it invalidated the entire point of my "realistic" drawing, because that is how I saw it.

The picture went away and life went on.

Flash-forward 35 years later to earlier this year when a remarkable new discovery was made; a photo of Houdini performing the Water Torture Cell in Scotland in 1922. This is the first and ONLY photo of Houdini actually performing the escape on stage. One of the major revelations of this new photo is that there are two bands wrapped around the cell. These were probably necessary as a precaution to keep the cell from breaking apart when filled with water. Two bands. 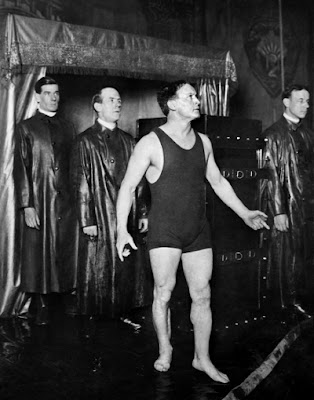 Look at this photo and look at my picture from 1977. Two bands across the front! And look at the spacing. I didn't draw my bands evenly down the face of the cell, which would have looked better. I have the top band up high for some reason. Look the pic. The top band is in almost exactly the same place.

So what in 1977 I thought violated the accuracy of the pic -- but I somehow felt compelled to include -- is in reality exactly what the cell looked like when viewed on stage by the audience (those bands probably looked like a part of the structure itself). It's also worth noting the tarp below the cell and what looks like a hose on stage, both of which mysteriously appear in my drawing.

So what do we think? Was I channeling a vision of the real cell on stage from a past life? Does this somehow prove a cosmic connection to Houdini (of course, a 35 year obsession certainly indicates something). Should I apply for JREF's $1 million prize for proof of genuine "paranormal activity"? Perhaps a nationwide lecture tour explaining my amazing psychic gift!

Or who will give me a buck for the drawing?
Written by John Cox at 8:23 AM