When Houdini returned to the cover of Genii after a ten year absence, he was not quite himself. That's because Vol. 17, No. 10 featured the image of Tony Curtis and Janet Leigh from the classic 1953 Paramount film, HOUDINI, on the cover. 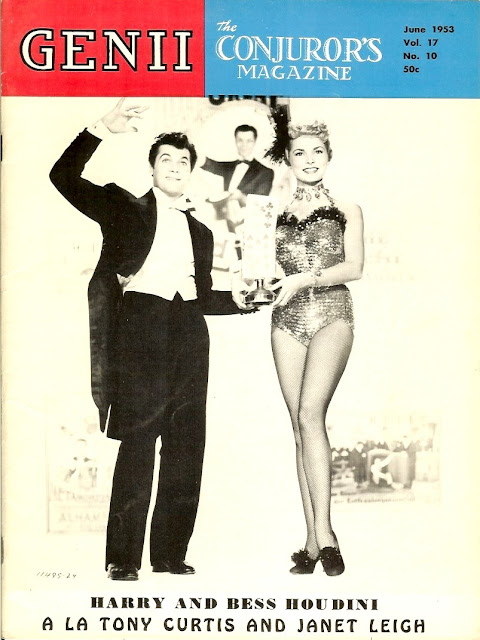 HOUDINI was released in July of 1953, so for many in the magic world this was their first look at Tony and Janet as Harry and Bess. The magazine itself features a short article by George Boston who was a technical advisor on the film. While the more famous Dunninger received the onscreen credit, Tony Curtis himself confirmed during his talk at the Magic Castle in 2009 that Boston was the one who really helped he and Janet Leigh become The Houdinis. In the article Boston predicts:

So ladies, gentlemen and children, I give you Janet and Tony Curtis, a credit to magic and magicians the world over. Through them magic will arise again, to the top of entertainment world where it rightfully belongs. In the words of George Pal of Paramount, "They ARE the Houdinis, brought back to life." 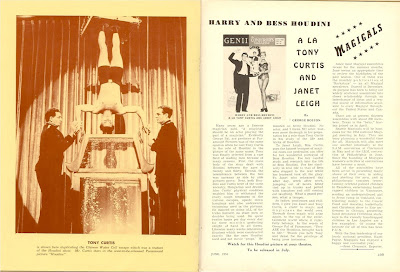 Of course, the magic world would take the film to task for its many inaccuracies. However, time has proven that the movie has been responsible for igniting an interest in magic in many young minds (including my own), and has done much to keep the legend of Houdini and the Golden Age of Magic alive. A worthy Genii cover subject to be sure.

Click here for a complete list of all the Genii-Houdini cover issues.
Written by John Cox at 3:08 PM