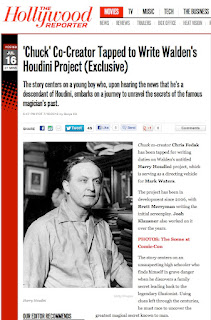 The Hollywood Reporter has landed the "exclusive" news that Chuck co-creator Chris Fedak has been hired to write an untitled Houdini project for Walden Media.

According to the report, the story centers on an unsuspecting high schooler who finds himself in grave danger when he discovers a family secret leading back to the legendary illusionist. Using clues left through the centuries, he must race to uncover the greatest magical secret known to man.

The project has been in development since 2006, with Brett Merryman writing the initial screenplay. Josh Klausner also worked on it over the years. Mark Waters is attached to direct.

Waters and his Watermark Pictures partner Jessica Tuchinsky are producing along with Jason Hoffs. Walden's Evan Turner and Michael Bostick are overseeing.
Written by John Cox at 7:14 PM