Seems like every week something especially noteworthy sells on eBay. This week that honor goes to this undated playbill/program for Houdini at the Palace Theater, which sold yesterday for $228. This is a nice piece of ephemera. Can't say I've ever seen Houdini billed as "The Man Who Will Not Stay Put" before.* I also like that this carries a quote from Teddy Roosevelt. 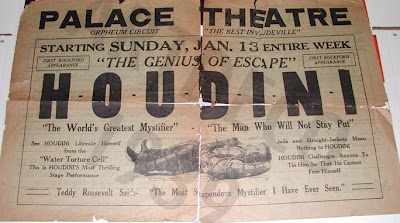 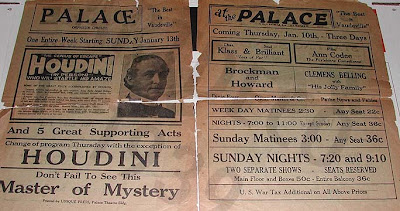 As always, congrats to the buyer.

* UPDATE: Ironically, right around the time this sold yesterday, I received an email with some clips of Houdini footage, and one of the clips showed an ad that said, "The Man Who Will Not Stay Put." So I went from never seeing this billing to seeing two examples on the same day. Weird.
Written by John Cox at 6:55 AM