Occasionally I'll score something on eBay that is simple, inexpensive, but still a gem that reveals a lot. This terrific newspaper advert for Houdini's final motion picture, Haldane of the Secret Service, is one of those items. There's a lot to like about this ad, which appeared in The Anaconda Standard on January 13, 1924.

First off, you don't see many newspaper ads for Haldane, so this is pretty unique. I love the illustration of Houdini's face (which I believe I've seen used elsewhere?), and also how the ad sells him as a "super-detective", snagging his man as almost a supernatural presence. I like that Gladys Leslie gets a mention, I love the plot blurb, and the mention of a Harold Lloyd movie sharing the bill at the Bluebird Theater is a bonus. 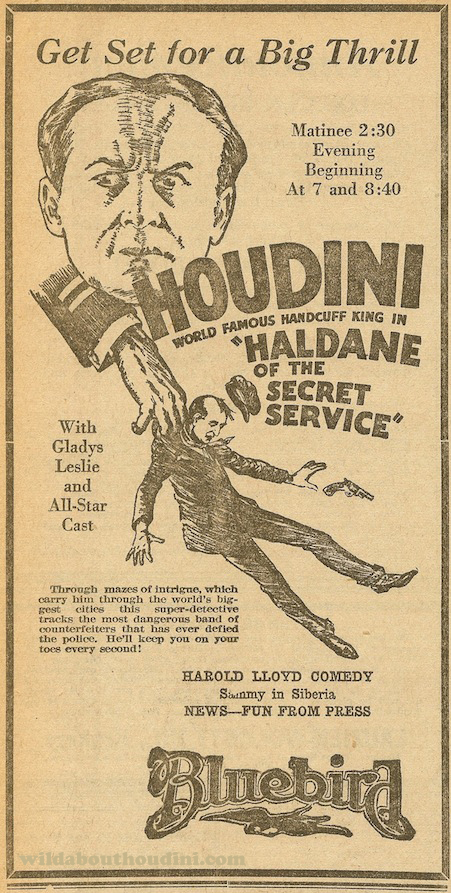 But there's also something about this ad that perfectly captures what was wrong with Houdini short-lived movie career. This is the hard sell -- see Houdini bust the bad guys! But is this really how we want to see Houdini? The idea of Houdini as a fictional G-man seems a little cheap, and the mention of "the Handcuff King" only helps to remind us of better days.

But this idea of Houdini as a crime buster -- a role he enjoyed playing even early in his career with the publication of The Right Way To Do Wrong -- would find better expression in his spiritualist exposés, which were sort of fusion between crime and ghost busting. So one can look at his movie career, and this ad in particular, as a step in that direction. Just replace the thuggish gangster with a panic-stricken fake medium and you've got something. Houdini sees all, and he's going to get you!

Ironically, removing Houdini from his identity as a magician and escape artist and instead offering him up as some kind of a super detective (or super spy) is exactly what Hollywood seems hell bent on doing in so many of the current Houdini movies and television projects currently in development. If any of these projects come to fruition, I expect they might learn the hard lesson of Haldane.

No posts this weekend (unless something major breaks), so enjoy this Haldane ad for a few days. I know I will!