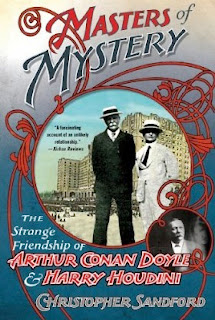 The U.S. paperback edition of Masters of Mystery The Strange Friendship of Sir Arthur Conan Doyle and Harry Houdini by Christopher Sandford will be released on February 5, 2013 according to a pre-order listing on Amazon.

Cover art (right) is the same as the hardcover edition released by Palgrave Macmillan last year. The only different is the inclusion of a positive review blurb from Kirkus Reviews.

The UK paperback, which carries the less unwieldy title Houdini and Conan Doyle, will be released on October 15, 2012.

You can read my review of this excellent book HERE.
Written by John Cox at 8:12 AM