Need further evidence of the popularity of Houdini 86 years after his death? Well, how about the fact that today sees the release of two books aimed at kids that feature a young Harry Houdini as a character.

First up is The Treasure Chest #4: Prince of Air by Ann Hood. This series finds twins Maisie and Felix transported via a treasure chest time machine into the past where they meet up with famous historical figures. In this latest adventure the twins meet, you guessed it, Houdini! 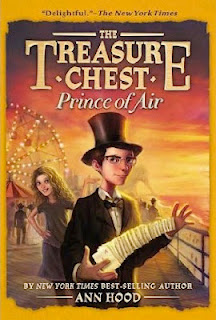 When Great-Uncle Thorne arrives at Elm Medona, Maisie and Felix's lives get shaken up again. Uncle Thorne moves the family into the mansion proper. One night, Great-Aunt Maisie arranges for Thorne, Maisie, and Felix to rendezvous with her in The Treasure Chest. Minutes later, Maisie and Felix find themselves at a magic show on Coney Island in 1893 starring Harry Houdini. As they follow him and his brother Dash to Pennsylvania and Rhode Island and back to New York City, they wonder what has become of Great-Aunt Maisie and Great-Uncle Thorne. Then one evening at Tom Pastor's Famous 14th Street Theater, the curtain opens and all is revealed.


The Treasure Chest: Prince of Air can be purchased at Amazon.com in both hardcover and paperback.

Also out today is the latest installment of Scholastic's popular interactive and multi-platform series, The 39 Clues. This time Houdini joins the adventure in The Cahill Files Book 4: The Houdini Escape by Clifford Riley.

Young Harry Houdini's family is eager for a fresh start in America, but secrets from their past have followed them to New York. When the aspiring magician is kidnapped by a dangerous enemy, the Vespers, Houdini discovers a secret talent: death-defying escapes. Will his rare talent allow him to survive the attack? Or will it get him into deeper trouble than he ever imagined?


The Houdini Escape is currently available only as an eBook. It can be purchased at Amazon.com.
Written by John Cox at 7:27 AM