Gallery Brooklyn is hosting an exhibition of traveling artwork by Bráulio Amado called Houdini. The show opens this Saturday, August 25, with a special reception from 6-9 pm. The show runs until September 16th. 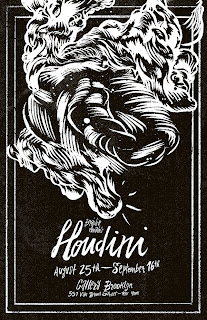 Houdini is a travelling exhibition by Bráulio Amado. Inspired by the greatest magician that ever lived, the series alludes to abstract universes and fantasies, exploring mind tricks and the possibilities of the impossible. The pieces invoke the unexpected and draw from raging sounds, like those of the Melvin’s Houdini record. Expect weird stuff.

Since 2012 the exhibition has been traveling to a different city every month, including Chicago, Denton, Philadelphia, Madrid, Berlin, Boston, and now, Brooklyn.

Braulio Amado is a portuguese artist born in ’87. He moved to NYC to work for Pentagram Design, and now is a freelancer graphic designer and illustrator living in Brooklyn. He is also the director of PEDAL, a portuguese free-monthly newspaper about bikes, and travels around the world with his band Adorno.


For more information about "Houdini" visit the Gallery Brooklyn website.
Written by John Cox at 10:52 AM