The Grim Game opens on Broadway 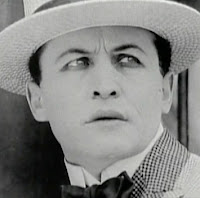 It was 93 years ago this past weekend that The Grim Game opened in New York at B.S. Moss’s Broadway Theater located at Broadway and 41st St. Houdini himself put in a personal appearance at the theater, "explaining on the stage a few of the dare-devil mystifying stunts portrayed in the film."

While I've heard of Houdini doing personal appearances for The Man From Beyond and Haldane, I believe this is the first I've heard of him doing so for The Grim Game.

This information comes from (where else?) Joe Notaro's terrific blog devoted to The Grim Game, Harry Houdini Circumstantial Evidence. Joe has posted two newspaper ads for the Moss Broadway Theater opening and also a review of the film and Houdini's talk from the New York Tribune. It's great stuff.


Click to read 'Houdini Opens at Broadway'
Written by John Cox at 9:08 AM