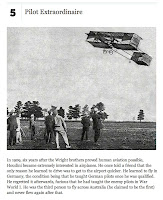 Listverse.com, a blog that specialized in Top 10 lists, has posted Top 10 Fascinating Facts about Houdini. Online lists can be lazy, but there is some real thought put into this one, and it has received a lot of positive and interesting comments.

However, I'm distressed to read under #5: Pilot Extraordinaire: "He was the third person to fly across Australia (he claimed to be the first)."

This new "fact" is a direct result of spurious changes made to Houdini's Wikipedia page by partisans in the ongoing pissing match over which region in Australia can celebrate the first airplane flight. I fought these changes earlier this year, but failed to have it removed or revised. (You can read about that here.)

This is why it's dangerous to rely solely on Wikipedia for the "facts", especially when it comes to Houdini. His page is currently a bit of a mess.
Written by John Cox at 11:51 AM