A magnificent photo of Harry and Bessie Houdini graced the cover of Genii The Conjurors' Magazine Vol. 26, No. 2 in October 1961. It had been five years since the last Houdini memorial issue. This issue would make up for lost time, and also kick off a new era in the Houdini-Genii relationship. 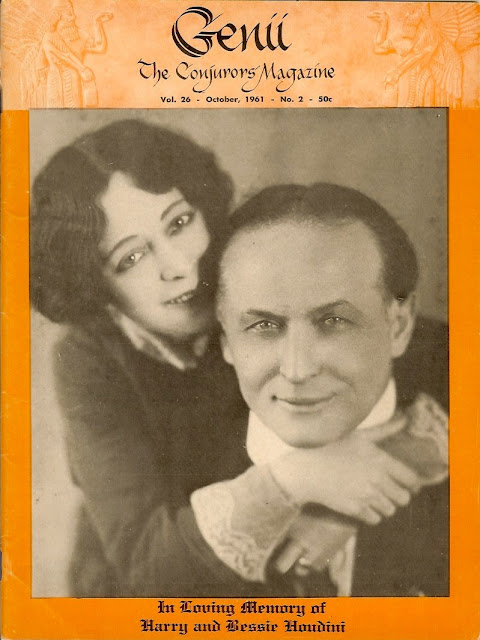 In many ways, this is one of my favorite Houdini issues of Genii. And not just because I love the cover pic. This issue announced the arrival on the scene of 17-year-old Patrick Culliton. Editor Bill Larsen Jr. writes that Patrick is "young in years, but old in the history of magic in general and Houdini in particular." Patrick would assume the role that Edward Saint played in the 1930s, motivating Genii to produce an annual Houdini issue by providing unique content. Says Patrick, "Bill hadn't done one in a couple of years and the Houdini issues always sold a few more magazines."

In this issue, Patrick writes two articles; one on "Houdini's Thumb Racket" and another about "Houdini's Assistants". Patrick had written both articles when he was only 15. (The latter article was reprinted in Walter Gibson's The Original Houdini Scrapbook in 1976.) Patrick also provided the cover portrait and the photo of Houdini's assistants "after the beer challenge." Both had come from the collection of Jacob Hyman. "Marie Hinson wrote a nice note to Bill about the Houdinis on the cover," says Patrick.

This issue also contains an impressive Houdini bibliography by Dave Price of the Egyptian Hall Museum. The contents reflect what is in the Egyptian Hall collection, and covers three pages with some 211 individual listings. It includes sections on books, articles, handbills, letters to and from Houdini, letterheads, photographs, posters, programs and more. 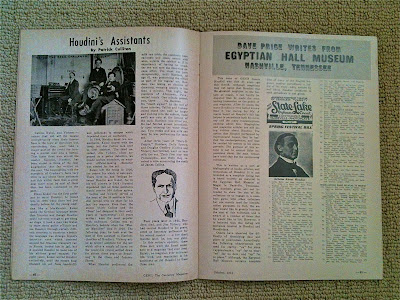 Notable non-Houdini items include a nice photo and announcement of the debut of Mark and Darnell Wilson's The Magic Land of Allakazam TV series (which featured a vanishing elephant), and the re-naming of Main Street in Colon Michigan to Blackstone Avenue in honor of Harry Blackstone Sr.

In his Genii Speaks column, editor Bill Larsen says, "I hope next year to really put out a collectors item in the way of a Houdini issue with Pat's help." It was a promise he would keep.


Click here for a complete list of all the Genii-Houdini cover issues.
Written by John Cox at 10:54 AM