Prince of the Air: A Story of Young Houdini 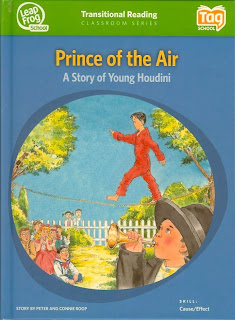 Here's one that I missed when it was first released by Leap Frog back in 2003. Prince of the Air: A Story of Young Houdini is nicely done interactive children's book and learning tool by Peter and Connie Roop with beautiful illustrations by Antonio Castro.

Released as part of the Transitional Reading Classroom Series, Prince of the Air tells the story of young Ehrich Weiss performing a tight rope act in a traveling circus in his small town of Appleton, Wisconsin. The book informs its young readers that "some parts of the book are not true. This kind of book is called historical fiction."

Like many of these books, it conceals the fact that the young hero turns out to be Harry Houdini until the end (although the title pretty much spoils that surprise).
Written by John Cox at 9:27 AM