Continuing our look back at issues of Genii magazine that have celebrated Houdini on their covers, here's Vol. 21, No. 2 from October 1956. This "Houdini Memorial Issue" (back to being an annual tradition) featured a dramatic bronze Houdini bust by Italian craftsman Nicholas Volpe on the cover. 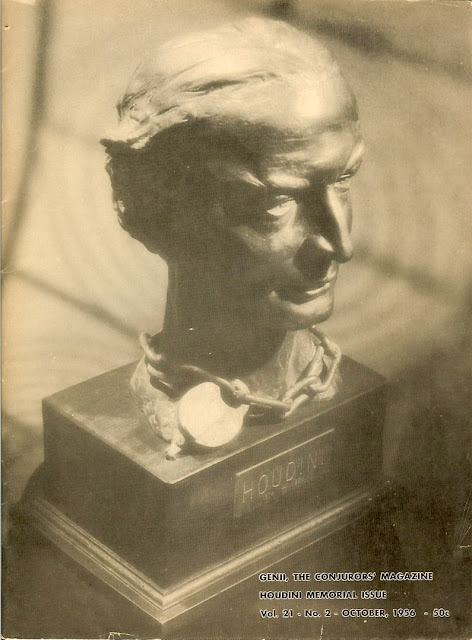 Inside the magazine profiles Volpe's life and work, "The Magic in Art", and his desire to "recreate the face and legend of this master of magic." Where is the Volpe bust today, I wonder? It also has an article by David Price of the Egyptian Hall about a 1902 photograph of Harry and Bess.

But the real Houdini highlight in this issue is the full transcript of William Larsen Sr.'s lecture about the Final Houdini Seance in 1936. Larsen was an attendee of the seance. A lot of the information is familiar, but there are few new nuggets, such as that the night was "uncommonly cold" and that some guests "had the foresight to prepare for the occasion by stopping in at the Knickerbocker cocktail bar." Then there is this:

Now it seems that Dr. DiGhilini, a well-known West Coast mystery worker and a few other outstanding magicians didn't really believe anything was going to happen. They feared that the invited guests and the waiting world were doomed to bitter disappointment. So, they offered their services to help better matters. It would be excellent, they told Dr. Saint, to get Houdini's handwriting on the slate and they could assure its appearance there. Or, to cause a dove to fly up from the center of the table, seemingly created out of nothing. Dr. Saint refused these generous offers. 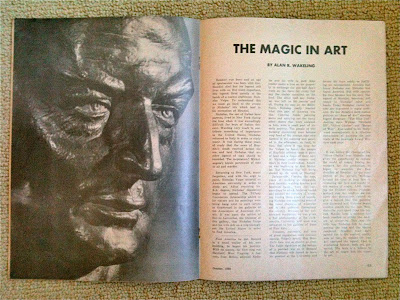 Also in this issue editor Bill Larsen Jr. announces the engagement of his mother Gerri (a close friend to Bessie in her final years) to Art Baker, a television personality most well-known for the show You Asked For It (which featured Houdini clips from time to time).


Click here for a complete list of all the Genii-Houdini cover issues.
Written by John Cox at 7:50 AM