Houdini eComic for iPad and iPhone 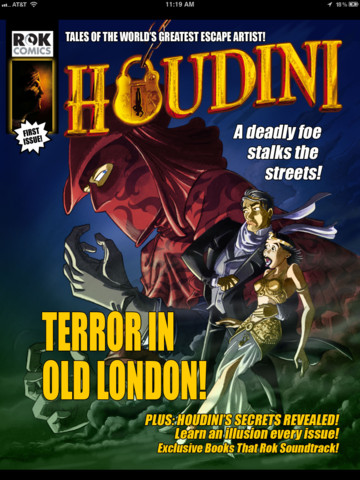 Rok Comics, a "champion of independent comics on mobile", have released Houdini: Mists of London by Jamie Allan Nicklin and Simon Mark Wheeler, the first of what appears to be a series of eComics featuring the (fictional) adventures of Houdini.

This clever 28-page electronic comic has swipe to read navigation, a full audio soundtrack featuring the voices of Jerry Curran as Houdini and Shanna Sharp as Bess, and pop-up extras profiling key characters and the world of Houdini. Artwork is by Rafael Broseta and David Belmonte. Here's more from Comic Cloud:

Rok Comics is proud to present the audio-enhanced adventures of the world's best-known escape artist Houdini, featuring a full soundtrack that brings the story added life and excitement!

Terror stalks the streets of Victorian London as a masked villain known as the Vanished Man kidnaps the partners of the rich and famous for huge ransoms! But has he bitten off more than he can chew when he snatches Houdini's wife, Bess, from the dressing room of the Alhambra Theatre?

Join Houdini and the best of Scotland Yard as he races to catch his dangerous foe before he harms his much-loved wife – and discover a deeper mystery behind the first!

Houdini: The Mists of London is a Rok Comcs production with art by Rafael Broseta and David Belmonte, backed by a full voice cast and soundtrack! 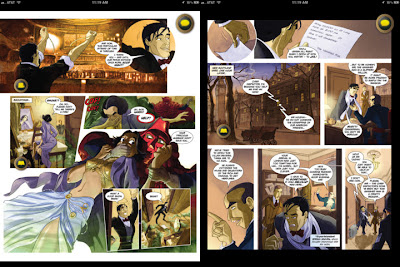