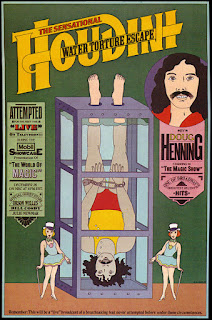 The second most famous Water Torture Cell has to be the cell Doug Henning used during his live NBC The World of Magic television special in 1975. History has proven that broadcast to have been a defining moment in magic history -- you could even say it ushered in a second Golden Age of Magic that we are enjoying today.

Henning's cell was specially built for the illusionist by Owens Magic. Henning only performed the escape a few times. Escape Artist Dean Gunnarson came into possession of the cell early in his career and continued to perform it as part of his show. Now Dean has decided it's time to pass this important piece of magic history to new hands. Says Dean:

"The time has come for me to find a better home for this important piece of modern magic history. I would love the WTC to have a new guardian and it go someplace where people could see and really appreciate Doug and his contribution to the magic world.

It is also still in good preforming shape so if you wanted to present it each night to an audience you could. It is a beautiful quality piece of magic history.

I have chosen to try this route first of finding it a home rather than a general auction because I really fell it is an important part of magic History. I would like it to go to someone who loves it as much as I have and not just as an investment that will continue to rise in value. With the tragic loss of Houdini’s WTC Henning’s would historically be the most important WTC in magic today."