An impressive collection of unpublished documents relating to Houdini anti-spiritualist crusade in Chicago have sold in a Potter & Potter auction for $11,000 (plus a 20% buyer's premium). The full auction description is below. 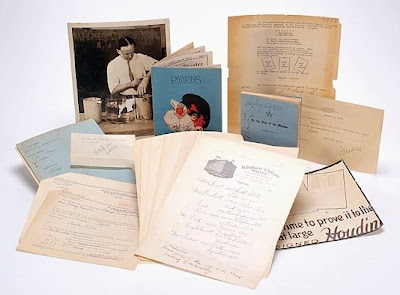 Houdini, Harry. Important archive of unpublished Houdini anti-spiritualist documents. A cache of documents, including TLSs and legal documents from Houdini and his closest confidants in the war against fraudulent mediums in the city of Chicago.

Among the documents are affidavits signed by Rose Mackenberg, Houdini’s lead investigator; James Collins and James Vickery, Houdini’s two closest assistants both on-stage and backstage; his secretary William J. Hoyer; and numerous other members of Houdini’s company, including his manager, Al Smith, all of them witnesses to Houdini’s crusades in Chicago.

These documents include verbatim reproductions of Houdini’s stage “patter” regarding fraudulent mediums, and detailed descriptions of séances conducted in Chicago (including blindfold message reading, etc.), and are all related to a supposed medium and promoter of séances, Arthur MacNally or one Dr. C.A. Burgess, or other mediums from Chicago. Many of the affidavits and reports by Mackenberg give illuminating and penetrating detail with regards to the séances she attended.

The archive also includes several documents with Houdini’s holographic notes (among them Photostats of lists of mediums, and the book "At the Feet of the Master"); a complaint against Houdini for trespass by MacNally; a summons for Houdini alleging him liable for $100,000 in damages to MacNally; along with two photographs of Houdini (one chipped), and a program for Houdini’s appearance at the Princess Theater of Chicago, for the time he appeared there which coincided with these legal proceedings. Nearly 100 pages in total.

All material dates from the spring of 1926, just seven months before Houdini’s death. Condition of most documents is very good, though a few show age and edge wear, including chipping at original folds. A unique and important archive of never before published Houdiniana, and of historic significance.


Sounds like a nice collection of documents. The trespass complaint by MacNally intrigues me (perhaps have to do with Houdini gaining access to a seance room via disguise?).

Congrats to the new owner.
Written by John Cox at 6:15 AM